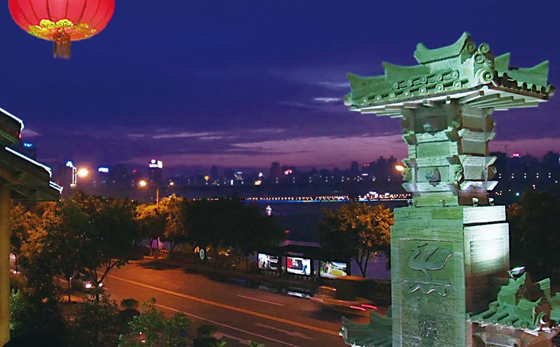 Do you know these stories behind Hongyadong?

CHONGQING (CQNEWS) -- Some people say Hongyadong is as beautiful as poetry, some say it would be a shame not to visit it once in a lifetime, and some say how wonderful it is. But most people only know Hongyadong for its stilted buildings and its unique illumination on the riverbank.

In fact, in addition to the splendor visible to the naked eye, Hongyadong has many stories, reflecting the vicissitudes of history and the passage of time, all of which fall on this wall of cliffs. Now, the reporter from Chongqing Evening News takes you on a journey through time and space to take a look at what seems to be a somewhat hazy past.

It has the look and feel of a waterfall cave

Located on the 1st floor of Hongyadong, it is one of the twelve views of the Ancient Bayu.

The waterfall on the cliff gives the impression of a waterfall cave. Huang Tingjian, a poet of the Northern Song Dynasty, praised it, “The water flies off the high cliff, and the green river flows.” Wang Erjian, the governor of Chongqing in the Qing Dynasty, also wrote: “The Cliff is as beautiful as a painting, and the breeze adds a little more color to it”… These poems and writings paint an enchanting picture and add more historical and cultural flavor to Hongya Dicui.

Reproduction of ancient totems and rituals

At the entrance to the 1st floor of Hongyadong is a stone-made Hanque (watchtower in the Han Dynasty), which is a replica of a relic unearthed in Wushan in the Three Gorges reservoir area.

A taste of Bayu folklore

A special feature of Hongyadong, apart from the stilted buildings, is many bronze sculptures scattered throughout the scenic area, all of which were carefully created by Guo Xuanchang, then dean of School of Humanities and Arts of Chongqing University.

Among them, the main sculpture “Memory of the Mountain City” can be considered the spiritual pillar of Hongyadong’s bronze sculptures. The whole sculpture is 12.5m high and 7.5m wide, made of full bronze with gold and platinum inlay on the outline, and shaped in the pictogram “mountain”, representing the meaning of the Mountain City. The sculpture is a perfect unity of realism and romanticism, which elevates, exaggerates and deforms the traditional stilted buildings of Chongqing into three branches, like a big tree, highlighting the culture and folklore of Bayu, and is a metaphor for “mountain in the city, city in the mountain”. In July 2006, the sculpture also won a gold medal for national urban sculpture.

In addition, the bronze sculptures “Twelve Views of the New Bayu”, “One-Character Play” and “Rickshaw Driver”, from the small to the large, inherit and promote the spirit of perseverance and straightforwardness in Bayu culture through the creation of details of people’s lives.

The ancient barbette guarded by general of Ba

On the 11th floor of the Hongyadong Hotel, there is a bronze sculpture on the left side of the city wall, which has been a military fortress since ancient times, with the remains of an ancient barbette, the Jiangzhou Barbette, which was guarded by general of Ba in the Eastern Zhou Dynasty and belonged to the anti-Jin barbette of the Song Dynasty. By the Qing dynasty, this was the most important gun emplacement of the Zhenjiang garrison. What we see now is only a replica created by Mr. Guo Xuanchang; and the real cast iron cannon has been relocated to a museum for preservation.

A portrait of life in the old city of Chongqing

This is a situational block created in 2020, themed around 1980s Chongqing city life. With a total floor area of about 3,100 square meters, it artistically presents scenes of life in the 1980s and period interactive experience areas, etc. It also features a holographic MR interactive music show of Teresa Teng at the Shancheng Cinema in the inner city, which is a tribute to recent history in Hongyadong. (Translated by Wang Huixin, Fathom Language Limited)